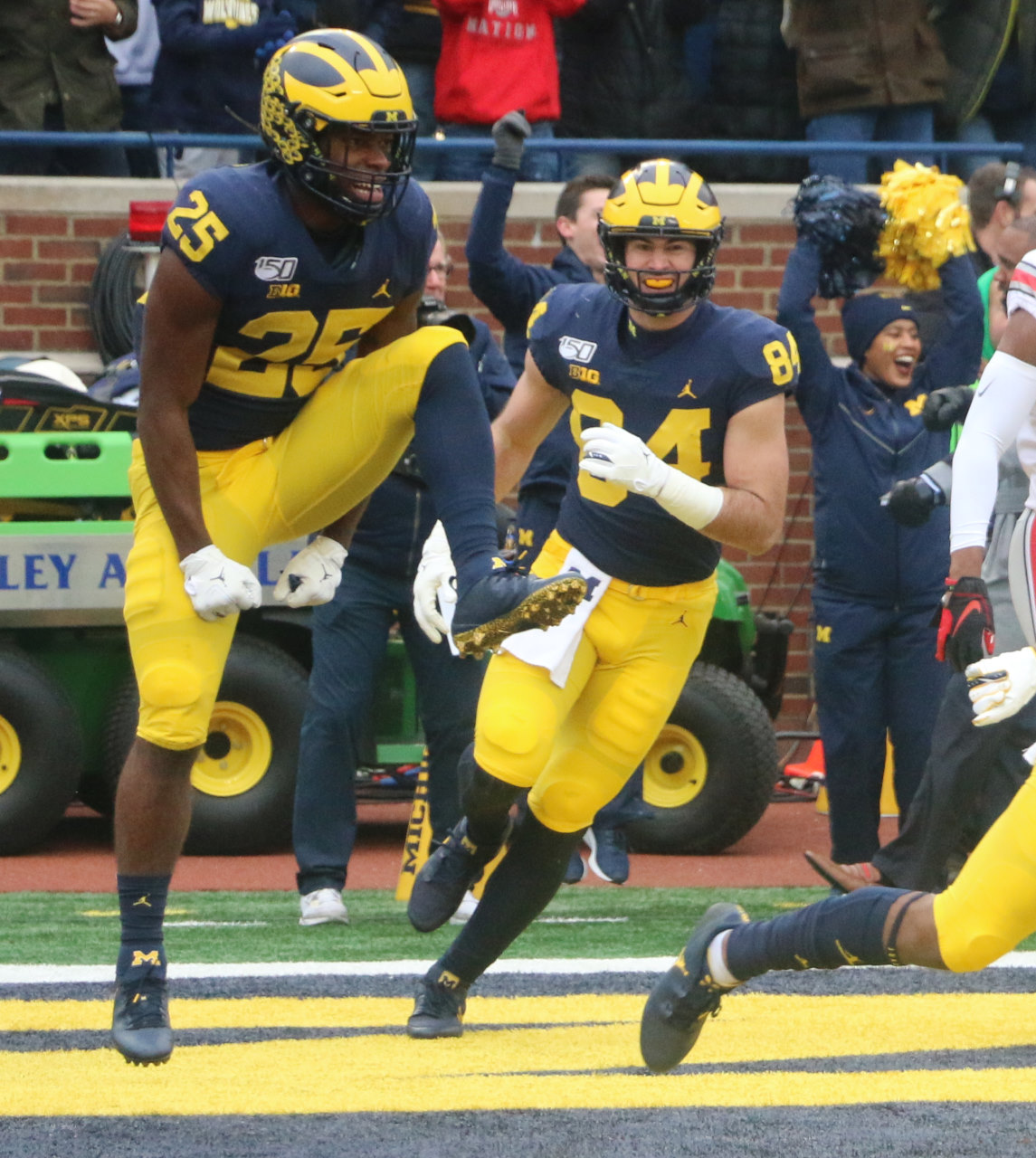 The Wolverines overwhelmed the Maryland Terrapins in College Park.  The offense, defense, and special teams all found the end zone as Michigan trounced the Terps 59-18.

Since we reached the 2nd half of the regular season, the Buckeyes have been neck-and-neck with Georgia for the top spot in Bill Connelly’s SP+ predictive rankings.  Going into this game, OSU and Georgia have a rating of 32.3, while Michigan has climbed to 4th with a rating of 24.0.

Most of the commentary in Michigan media this week has been focused on the Wolverines’ running attack helping to keep Ohio State’s high flying offense on the sidelines.  I agree that Michigan’s best defense will be a good offense, but there will be opportunities against the Bucks’ pass defense as well.

Josh Gattis has put a lot of variation on film in the rushing attack.  Ohio State will need to be prepared for gap scheme runs between the tackles, and zone scheme runs that attack off tackle or outside.  Hassan Haskins will lead the charge from Michigan’s backfield, but I expect to see Blake Corum return.  Also, Donovan Edwards announced his arrival as a weapon last week in College Park.

I believe all that run game variation will help gain rushing yards, but I think the biggest benefactor will be Cade McNamara.  The Wolverines have speedy outside receivers that must be respected by the CBs and safeties.  I think Michigan will look to find chunk yardage in the middle of the field via the intermediate passing game.  Hopefully Erick All is closer to being healthy, but Donovan Edwards could also threaten those linebackers’ coverage ability.

When the Buckeyes have the ball, Michigan will need every coach and every player to have their best game of the season.  OSU has 3 WRs that would likely be #1 pass threats on any other team in the Big Ten except Penn State with Jahan Dotson.  Nobody in the country can cover all three of those guys for more than 2-2.5 seconds.  Aidan Hutchinson and David Ojabo will need to lead a heroic effort to consistently force QB CJ Stroud to throw quickly.  Then all 11 Wolverines need to gang tackle because Wilson, Olave, and Smith-Njigba could each turn a 6 yard reception into a house call.

Traditionally, this game is won by the team who rushes for more yardage.  While I don’t think this game is quite that simple to project, I do think that will end up being a true statement again this year.  5-star freshman TreVeyon Henderson has the same type of explosive ability as Blake Corum and Donovan Edwards.  The Buckeyes are also deep at running back with Miyan Williams and Master Teague likely to get touches as well.  Given how dangerous the quick-strike passing attack can be for OSU, it may be beneficial to use the defensive game plan to invite the Buckeyes to march along the ground.  This would help keep the clock running and reduce the total number of possessions the same way a Michigan running attack would.

PREDICTION: On our preview podcast for The Game, we spent a good chunk of time trying to rally our portion of the fan base.  The pitch is basically this: don’t let past results suppress your enthusiasm for this 2021 team.  The Wolverines are absolutely capable of standing toe-to-toe with Ohio State.  Michigan’s most talented players will need to turn in iconic performances.  The offensive and defensive game plans need to land successfully, especially early on.  The 2nd half adjustments will also be critical, as the Buckeyes have found a way to pull away in the 3rd quarter in the last 3 editions of  The Game.

The numbers and analytics are pretty clear, and I reflect that analysis in my official prediction.  But, I know there are multiple paths to a Michigan victory.  I am excited to see the entire community gather in Ann Arbor to cheer this team as they try to forge one of those victory paths this Saturday.  Have a very Happy Thanksgiving, and Go Blue!
Michigan 35 Ohio State 38 (PRESEASON Michigan 21 Ohio State 31)