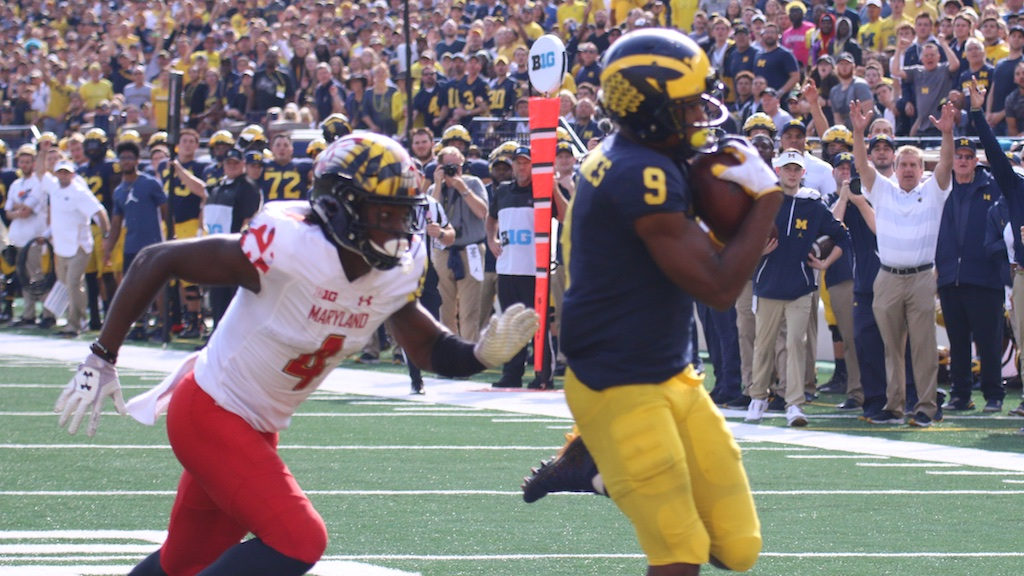 Michigan bounced back from a sluggish start in Happy Valley.  Cade McNamara threw for 3 touchdowns and the Wolverines’ defense harassed Sean Clifford en route to a physical 21-17 victory over the Nittany Lions.

The Vegas bookmakers have certainly dialed into similar calculations as those that Connelly uses for the SP+ model.  The Sunday betting line opened at Michigan -14.5 and has moved to -15.0.  Michigan has been very consistent and predictable, going 8-2 versus the spread so far.  Maryland is a total rollercoaster for the 2nd consecutive season.

Regardless of how Josh Gattis chooses to attack the Terps, Michigan should be able to execute that particular game plan.  The Wolverines haven’t seen a defense ranked this low in SP+ since Game #3 vs. NIU.  The number one question in this match up is the health of Michigan’s various offensive players, especially Blake Corum.  Hassan Haskins has proven that he is capable of carrying the workload.  However, Corum’s open field explosiveness has been missed.  Also, forcing the opposing defensive coordinator to account for Corum from sideline to sideline helps create running and passing lanes in the middle.

Some other walking wounded may also see reduced snaps in this game, including tight end Erick All and wide receiver Roman Wilson.  With at least a handful of these injury problems facing the offense, we may not see the scoring explosion that the SP+ ranking disparity would suggest.

I was pleasantly surprised to see the Wolverines’ defensive unit ranked in the top 10 in the preseason.  I fully expected the defense to drop in the early season, and hoped they could rebound back near the top 10 by November.  Here we are in late November, and the Michigan defense has steadily climbed the SP+ rankings to #5 nationally.

Maryland’s offense is dangerous, but not nearly as consistent as the Wolverines’ defense.  Quarterback Taulia Tagovailoa leads the Terps.  He possesses both the arm talent and the running ability to cause significant problems for Michigan.  I expect that he will pull a few rabbits out of his magic hat.  However, he will also fall victim to creating huge negative plays as well.  Taulia has shown that he will throw into coverage, especially when targeting former 5-star recruit Rakim Jarrett.

We know Aidan Hutchinson and David Ojabo will make Tagovailoa scramble.  If the Michigan linebackers keep him contained on the ground, and the Michigan DBs make a handful of plays on 50/50 balls, then the Wolverines should be able to hold Maryland under 20 points.

PREDICTION: I didn’t expect that Michigan’s path to this point in the season would look how it has.  However, this is pretty much what I expected Michigan to be once this game rolled around on the calendar, so I didn’t tweak my preseason prediction by much.  Part of me wanted to lower Michigan’s offensive output, because the Wolverines’ staff may be overly vanilla if they can get away with it.  However, even a conservative game plan has yielded 30+ points for this team against better defenses than Maryland’s.  I know it’s familiar, but it remains true: if Michigan plays well, this should be a comfortable victory.
Michigan 39 Maryland 17 (PRESEASON Michigan 39 Maryland 14)