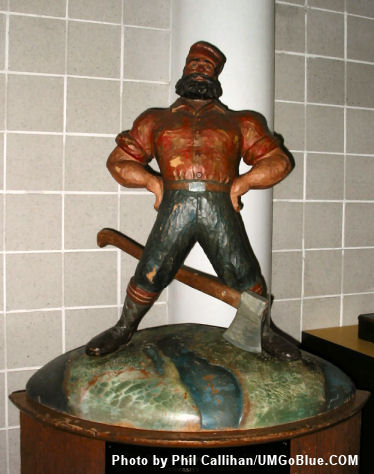 The fourth installment of this year’s series looking back at the football rivalry between Michigan and Michigan State takes us back to 1998. The offseason preceding the 1998 football season was arguably the most enjoyable of the modern era of Michigan football. The previous season, Michigan finished with a perfect record, a Big Ten championship, a Rose Bowl championship, and even a share of the national championship. Michigan Stadium had been expanded by 5,000 seats to reclaim its status as the nation’s largest on-campus stadium, and the Wolverines had landed the top overall player in the 1998 recruiting class, quarterback Drew Henson, and a very explosive running back, Justin Fargas. The offseason party lasted a long time in Ann Arbor. Unfortunately, a little too long.

The Wolverines started the season with losses to Notre Dame and Syracuse. Charles Woodson had left early for the NFL, and Marcus Ray had been suspended for dealing with an agent. By the time the Wolverines finally woke up from their offseason party, it was clear the Wolverines still had lampshades from the party on their heads, when they should have been wearing the winged helmet.

By the fourth game of the season, those helmets were on, and they buckled tightly. Michigan State roared into The Big House, and following a Bill Burke touchdown pass to Plaxico Burress, the Spartans led, 10-3. After a fumble on the ensuing kickoff, Michigan State got the ball back, but Paul Edinger missed a field goal, giving the ball back to Michigan. Tom Brady then put the ball in the very capable hands of Anthony Thomas, who rumbled 69 yards to tie the score. The Wolverines led by three at the half, but Michigan State had the momentum, and the ball starting the second half. That’s when the Wolverines regained their identity. The defense shut out Sparty in the second half, Jay Feely kicked his third field goal of the day, and 49-yard pass from Brady to Marcus Knight set up a Brady sneak, and Michigan went on to beat Michigan State, 29-17, highlighting all the usual strengths of a Lloyd Carr team.

The Wolverines finished 10-3 in 1998, losing to Ohio State, but topping Arkansas in a bowl game. The shame is that if the Wolverines had started the season with the same focus they had the previous year, things might have turned out much better.

Thanks to YouTube, ABC Sports, and YouTube poster CMB 7686 for the video. As always, I own nothing, and I do not profit in any way from this blog post.