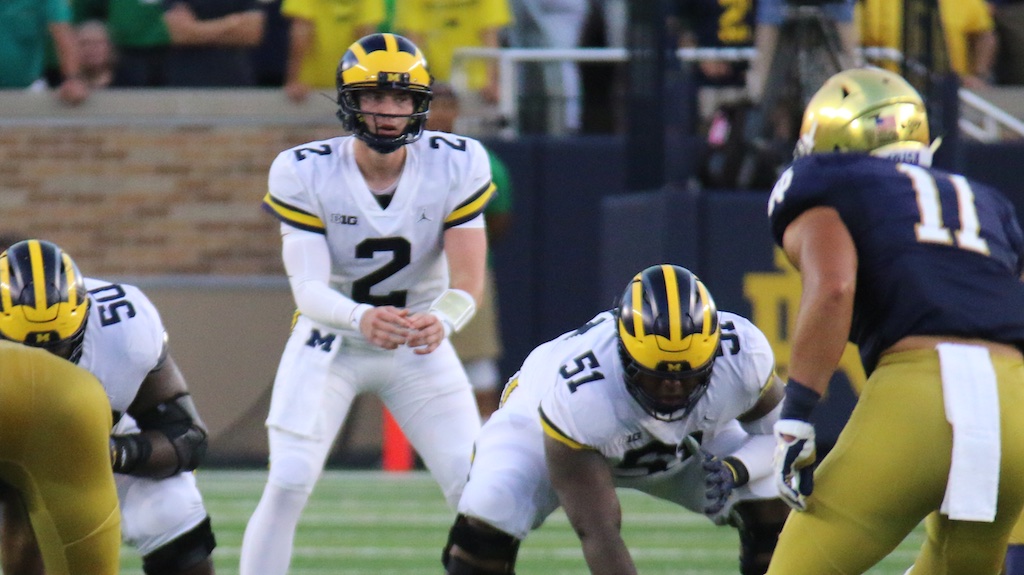 Another slow start cost the Wolverines as they fell short against Penn State, 28-21.   There were signs that the offense will indeed continue to grow through the season, but the Nittany Lions won 4 of the 5 SP+ factors.

Michigan Offense (52nd) vs. Notre Dame Defense (35th)
The most encouraging bit from last week in Happy Valley was the continued return to form for the offensive line.  Shea Patterson’s success stems directly from the protection improvement. There is still room to grow, as the offense continues to build on plays and concepts that have been successful to this point.  The success of Michigan’s short passing game out wide to their talented wide receivers will put pressure on edge defenders. That in turn should continue to widen the running lanes inside for Zach Charbonnet and Hassan Haskins.  Notre Dame’s defense started the season ranked 9th in SP+, but has slid down to 35th. The Wolverines’ success versus 12th ranked PSU defense last week should translate at home against the Irish. The question for this week will be whether or not we see the return of explosive plays.

Michigan Defense (4th) vs. Notre Dame Offense (13th)
The evolution of the 2019 Michigan Defense continues.  Michigan successfully limited Penn State’s success rate by mixing man-to-man and zone coverages.  However, the lack of interior pressure allowed Sean Clifford enough time to exploit coverage breakdowns and mismatches in the Wolverines’ secondary.  Notre Dame will pose a similar challenge this Saturday. The Irish consistently develop a strong offensive line, and Ian Book is a more seasoned quarterback than Sean Clifford.  As always, Don Brown will anchor his game plan on stopping the Irish running attack. Michigan absolutely must win more one-on-one battles than they lose. That starts up front where Carlo Kemp and Mike Dwumfour will be tasked with pushing the pocket into Book’s face.  On the outside, Lavert Hill and Ambry Thomas will need to keep 6’4” senior Chase Claypool from getting behind the defense.

PREDICTION: I don’t expect to see a lot of surprises or new phenomena inside the Big House against Notre Dame.  I think we’ll see Michigan’s defense perform well, but still allow 2 or 3 explosive plays in key moments.  Offensively, we’ll probably see the Wolverines out-gain the Irish in total yards. The struggles may continue down near the goal line, however.  When the dust settles, I think Michigan will narrowly hold on in a nail biter.
Michigan 24 Notre Dame 21 (PRESEASON Michigan 33 Notre Dame 13)