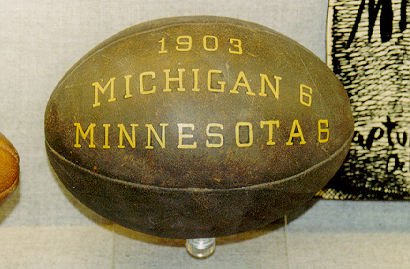 Paranoia has sparked the flames of many rivalries, and it’s at the heart of the football rivalry between Michigan and Minnesota for the Little Brown Jug. For the first installment of the series focusing on the Little Brown Jug, we go back to 1903. Prior to the game, Michigan coach Fielding H. Yost allegedly had some concerns about Minnesota, the host team, contaminating Michigan’s water supply, so he ordered the team’s student manager to purchase a water jug. So, student manager Thomas B. Roberts plunked down 30 cents for a five-gallon jug, and the Wolverines were set, or so they thought.

Michigan jumped out first with a touchdown in the first half, but then again, the game was played on Halloween, and true to form, some strange things started to occur. Minnesota scored a tying touchdown, and then the skies opened up, sending everyone scurrying for cover. In the commotion, Michigan didn’t retrieve the jug. Oscar Munson, a custodian, picked up the jug and gave it to Minnesota athletic director L.J. Smith. The game ended in a tie, and the jug stayed in Minnesota after the game. Michigan had to wait patiently for its chance to retrieve the jug.

Finally, the two teams played again in 1909, and again, in Minnesota. This time, the Wolverines came out on top, 15-6, and reclaimed their piece of hardware, along with a new appreciation for it.

The series began in 1892, and for the most part, Michigan has dominated. But the circumstances surrounding that tie in 1903 set the tone for the rivalry for rest of the series.