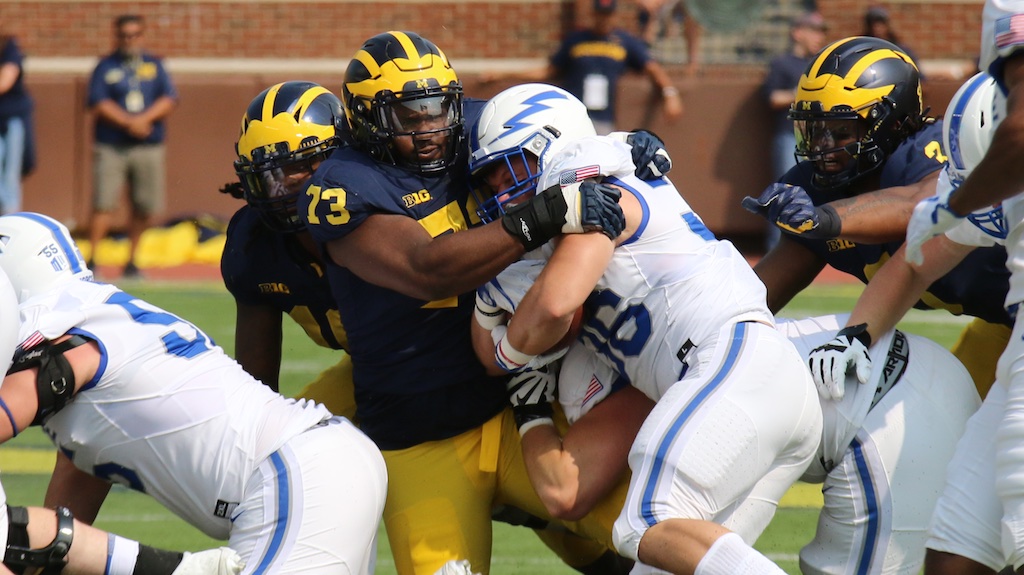 The Football team of the United States Air Force Academy visited Michigan Stadium Saturday, borne on the wings of a hope that they could shoot down the Wolverine’s intention of compiling three straight wins to start this M Football season.

Air Force belongs to the Mountain West Conference. Since Utah left that conference, the Wolverines can still say they have not lost a game to a MWC school.

There was a flyover of four Air Force T-38 Talons, two of which were piloted by U of M grads.

The Air Force parachute demonstration team entered the stadium the hard way in a most professional and eye pleasing manner. They soared in over the North score board, and all landed easily on or near the block M at the middle of the field. It was a perfect afternoon for such a venture.

Air Force walloped Virginia Military Institute (VMI) 62 to zip two weeks ago Saturday. They have had a bye week to prepare for the Blue, and had won seven games in a row. They provided the Wolverines with a real battle, never leading but doggedly staying in the game.

The Wolverines have faced the Air Force only three times, and have won all three. M won in 1964, 2012, and last Saturday. This series is just developing. It had a worrisome aspect in that the AF utilizes cut blocks more than most others, and runs a unique scheme that takes special preparation. Fortunately, to the best of my knowledge, no M player was injured by a cut block.

AIR FORCE FOOTBALL WEAPONS: Not the least of their football weapons is their Head Coach Troy Calhoun. His unusual triple option, run from multiple formations, basically ignored the pass except for one completion that went for 64-yards for a score. His defense engineered a system the Michigan Offensive Coaches did not solve to score a TD until the last moment of the game. Five Wolverine field goals instead of TDs helped propel Air Force to keeping it close, and close it was for most of three quarters plus. Four of the field goals were a result of red zone failures by the M offense, and the fifth by the offense stalling before they got to the red zone.

Both Harbaugh and Speight credited Calhoun defense scheming ability to disguise defensive schemes as a problem for M’s offense.

Junior Arione Worthman is a man worth a lot to the Falcon offense as a quarterback.  He was just one of seven passing, but the one completion was for sixty-four yards and a TD. An integral part of the Falcon ground game, he took a beating from the Wolverines, but kept after it. He ran 21 times for 56- net yards, with a long of 34.  He had thirty yards of losses.

STATE OF THE WOLVERINES AFTER THREE VICTORIES: Many thought pre-game that this game could very well be a trap game due to the Falcon’s triple option scheme, and the Wolverine’ inexperience with that system. While M nailed Florida, and Cincinnati pretty convincingly, and won against the Falcons, there is still concern about the fact that the Michigan offense is still not a well oiled machine under the guidance of the now experienced QB Wilton Speight. The offense has continued to sputter at times this season, in addition to some difficulties it had at the end of last season. In the first game this year, against Florida, Wilton threw two pick sixes. One of them may or may not have been his fault, but one was unquestionably his fault. These errors gave Florida a lead to the end of the first half.

Wilton came back splendidly in M’s first drive of the second half against the Gators, and the Wolverines played a good enough game to drive home a convincing win over a prominent SEC team, but he displayed his perplexing habit of missing open receivers, and high throws. The defense was M’s best unit on the field, and Special teams were OK against the Gators.

Saturday before last, against Cincinnati, Wilton and the offense sputtered again. This time it was careless fumbles and not interceptions. Only one fumble was recovered by the Bearcats, but Wilton’s error swung the game momentum gathered from M’s long opening TD drive, plus Kinnel’s pick six, to momentum favoring Cincinnati. This continued to spur the Bearcat’s momentum in their first drive of the second half. A potential blow out became, for a while in the third quarter, a struggle for survival.

It wasn’t all Wilton’s doing. The offense could not produce short first down conversions in the second half against the Bearcats multiple times.  The young right side of the offensive line did not look as good as it did against the Gators, both against the run and in pass pro. There were 68-yards of penalties as Wolverine special teams came apart. While Quinn Nordin was again highly reliable as a field goal kicker, some of special teams regressed. There was a shanked punt for short yardage, and a punt hit an M player in the back for an unnecessary, and most untimely turnover. The room for improvement on special teams against the Bearcats was as obvious as it was necessary.

Against the Air Force this Saturday, lack of TDs in the red zone became the problem. Four times the sputtering offense couldn’t score from the red zone. Once they faltered from farther out. There was only one TD in the game and that was late in the fourth. Again there were some drops by receivers, errant throws, fumbles, errors by the offensive line, plus an odd play. Wilton twirled to the opposite direction after receiving the snap, fast and neatly, a great athletic move, and ran towards the West sideline, where he tried to flip the ball to a receiver in or near the end zone. A defender got his hand on the flipped ball so it was deflected, and made available for interception. Fortunately, it hit the ground and was dead. Wilton had made a brilliant change of direction, and dash towards the goal, only to let the ill-advised flip pass spoil the play.

Wilton hit 14 of 23 attempts for 169-yards, and no TDs or interceptions. The offense made its living rushing 42 times for 190-yards and just one late TD.

I did not understand some of the play calling. Why all the fade routes that Wilton continues to miss? Where were the tall tight ends. Time out management seemed to rear its ugly head at times. Useless penalties continued to happen. Seven for seventy-two yards exceeds the previous high this year.

Wilton Speight is a smart football player, a good representative of the Wolverines. At this time, it is obvious that the coaches feel there is no one better currently on this roster than Wilton at the QB position, or you would see the better player at the helm on Saturdays.

I trust he can get his difficulties sponged out and begin to produce at his best again. Hopefully his confidence will not sag in this slump, and coaching can remedy his mechanics. That big jump expected between first and second season has been delayed, but it needs to become reality, soon. The Big Ten season looms with Purdue next and MSU after that.

SATURDAY’S SCORING: First Quarter: M’s Quin Nordin hit a 35-yard field goal to make it 3-zip. A Ty Isaac 32-yard scamper was part of an 11-play 58-yard drive. A score, but a red zone failure, all the same.

Second Quarter: Nordin hit a 26-yard FG, and it was 6-3. A 37-yard Peoples snag helped get the Wolverines to the Falcon 8 yard-line, where they stalled. Obviously, a red zone failure for the offense.

AF answered with a 50-yard FG to knot it at six again.With 3:18 in the quarter, Nordin hit again, this time on a 49-yard shot. Wilton Speight fumbled as he was sacked. Wilton tried to continue to throw the ball as he went down. M’s Nick Eubanks covered it at the Air Force 35. This FG made it an uneasy 9-6. 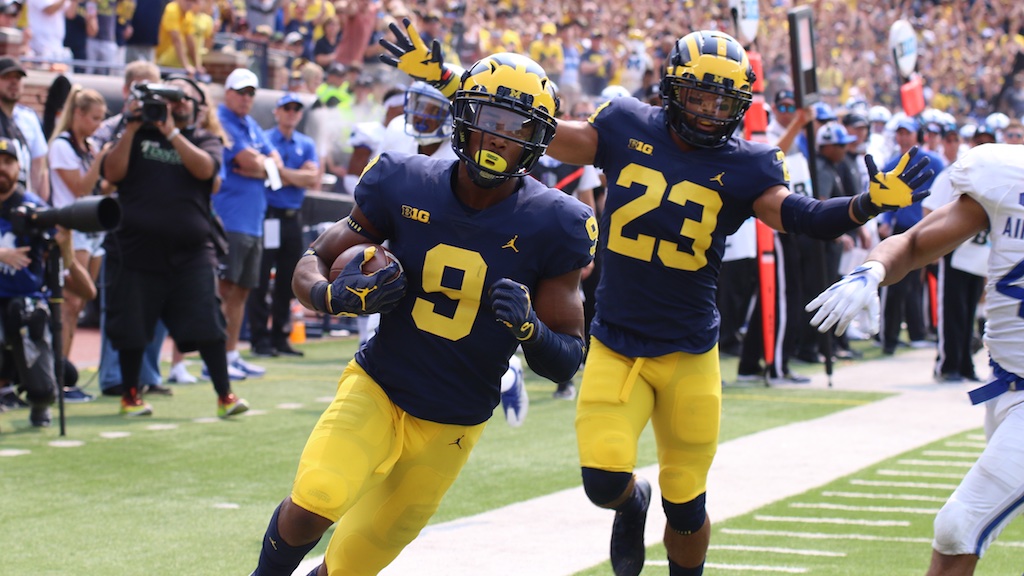 Third Quarter: Donovan Peoples Jones made the play of the game with a sterling punt return of 79-yards. It was now 16-6. He ran like he had radar. Crossing the field from side to side, he stayed in bounds along the eastern side line on his way into the north end zone. This was a return that would have made Peppers proud. Afterwards Jones said “I mean, it just opened up like the Red Sea. They did a great job of not clipping, and let me change the field. They did a great job of blocking and not holding. It just made my job very easy”.

This was the first M TD on the day, and the first of Donovan-Peoples Jones career. It will be long remembered. Having displeased the coaches in the way he was letting some catchable punts hit the ground against Cincinnati, and replaced by Perry in the Cincinnati game, he made quite a comeback Saturday. This was his not only the play of the game, but this play made him my player of the game.

The special teams were somewhat a mess last week, but returned with a bang this week. The Wolverines could not have done without their contribution of 22 points, as the game would have been lost. How long can the Wolverines depend on the defense or special teams to score their points remains a question.

In response AF hit its only pass. Unfortunately, it was for 64-yards. Now it was 16-13 and matters were serious again.

Quinn hit a 29-yard FG and it was 19 to 13. After an 11 play, 32-yard drive, the Wolverines stalled at the AF 11. Another red zone fizzle. Again, they couldn’t move the ball further, running or passing.

Fourth Quarter: Nordin was at it again in the fourth quarter, banging a 36-yard FG through to make it 22 to 13. The Wolverines had the ball at the AF 18. Again they could not run or pass in the red zone.

Karan Higdon’s 36-yard TD scamper at 1:02 of the fourth, down the east sideline, made it 29-13, and that became the final. A 24-yard pass to Tarik Black was the big setup play. Chris Evans had a 10-yard run, and a 4-yard run in the 9 play 73-yard game clinching drive. M couldn’t drive it in from 18-yards out. They were stymied in the red zone for the fourth and final time.

HOW THE OFFENSIVE SKILL PLAYERS DID: Running Backs-Ty Isaac was 16 for 89-yards with a long of 32, and a 5.6 average. He was again the best M back, but he danced a little on a couple of critical short yardage plays and came up short. Where is Kahlid Hill on those occasions? Karan Higdon lugged 12 for 64-yards, a TD and a 5.3 average. Chris Evans spent most of the game on the bench because of his first quarter fumble, but got 6 carries of 32-yards. It was ground game day.

Receivers-Tarik Black snagged 5 for 55-yards and a long of 24. Donovan Peoples Jones collared 2 for 52-yards, with a long of 37.

THE M DEFENSE OWNED THE DAY: The defense was again rough and ready. While they gave up a long pass play, likely lulled oblivious to the passing game as some in the press box had suspected would happen, by the prior lack of attempts, they were more than up to this task otherwise. The Falcons had only one completion in seven attempts. They rushed for 168-yards.
Devin Bush and Mike McCray each had seven solos and 4 assists, for a total of 11. Bush had a sack, as did Chase Winovich. Rashan Gary had one half sack. He made his presence felt all game.

BIG TEN OPENER LOOMS: The Big Ten opener at Purdue is at hand, ready or not. This year’s version of the Spoilermakers seems to be very good as evidenced by their convincing win over Missouri last Saturday.