For those who are too young to remember that would be Bo Schembechler at Michigan, Woody Hayes at Ohio State, Joe Paterno at Penn State, Ara Parseghian at Notre Dame, Paul “Bear” Bryant at Alabama, and Darrell Royal at Texas.

Ohio State’s Urban Meyer, with three national championships, one at Ohio State and two while at Florida, is certainly another. Saban and Meyer are in a class by themselves with multiple national championships. In addition, Meyer ranks third in all-time winning percentage (.8508) trailing only Knute Rockne (.8811) and Frank Leahy (.8643).

Florida State under Fisher has won three ACC titles and like Oklahoma, is also a perennial national contender. Miles has won two SEC championships (2007 and in 2011), which are not easy to come by especially when you face Alabama and Saban every year. Another national championship for any of these three coaches would elevate their status to that of a coaching giant.

Shaw and Dantonio are known to consistently do more with less than most other coaches, having regular success by getting more out of their players than some other coaches might. Despite not winning a conference championship, when it comes to coaches doing more with less Pat Fitzgerald of Northwestern has to be near the top of the list as well.

If Bielema can revive the Arkansas program and win an SEC Championship, he would separate and distinguish himself from the shadow cast by Barry Alvarez at Wisconsin. By winning conference championships in both the Big 10 and SEC conferences Bielema would then join Meyer with that unique distinction and certainly elevate his coaching level status.

As for the current top coaches that haven’t won a conference title, that would include Notre Dame’s Brian Kelly because of Notre Dame’s independent football status and Jim Harbaugh (formerly at Stanford and now at Michigan). Harbaugh’s Wolverines will be one of the favorites, if not the favorite, to win the Big 10 title this year.
It’s not always easy for successful college coaches to avoid the siren call of the NFL. Saban, Spurrier, and Bobby Petrino each took their shot in the NFL and were unsuccessful and returned to the college ranks. Harbaugh is one of the few that had success at both the college level and in the NFL.

For a coach to average 10 or more wins a year puts them in select company. The following coaches at major college football programs are in that group: Fisher, Marc Helfrich (Oregon), Tom Herman (Houston), Meyer, Chris Petersen (Washington), Shaw and Stoops. Three of those coaches are in their early 40s: Helfrich, 42, Herman, 41, and Shaw, 44 in July. Herman has been a head coach for only one season, but it was quite a head coaching debut as the Houston Cougars went 13-1 last year with a 38-24 victory over Florida State in the Peach Bowl. Petersen, 51, is 12th all-time in winning percentage with a .8168 mark.

In case you were wondering, Meyer, Shaw and Stoops are ahead of Joe Paterno’s pace to win 409 games, provided they decide to coach that long. It certainly helps that there are more football games now than back in the ‘60s and ‘70s when 11 and 12-game seasons including bowl games were the norm. Now, some schools have 13 and 14-game seasons.

Stoops has coached at Oklahoma since 1999 and will turn 56 this September. After 17 seasons, Stoops has won 179 games. After 17 seasons and at the age of 56, Paterno had won 162 games. Stoops’ winning percentage of .7956 is 17th all-time amongst college coaches.

Fitzgerald, 41, has 70 wins in his 10 seasons at Northwestern. Kelly, 54, has won 226 games in 26 seasons as head coach, with 118 of those while at Division II Grand Valley State University.

As for the best young coaches in college football, and by young, meaning in their 40s, Shaw, Swinney and Herman are in that group.

Swinney, 46, once again this year will have Clemson in the national championship picture and could join the exclusive list of coaches to win multiple conference championships and a national title. Don’t be surprised if in 2016, Swinney and Harbaugh continue their ascent on the college football coaching mountain.

John Baranowski is a sports historian and contributor to newspapers, sports publications and sports websites. 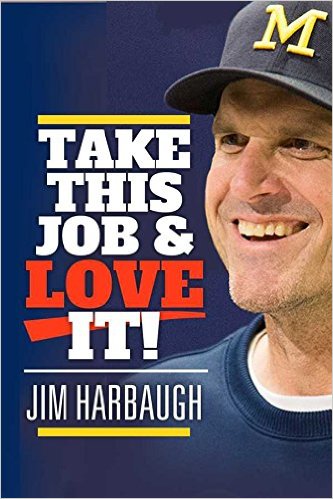 ALL IT TAKES IS ALL YA GOT- JOHN DUERR

John Duerr’s childhood was in Southern California, but he graduated from St. Alphonsus High School in Dearborn, Mich., before walking on at Michigan. Duerr lives in Auburn Hills and works for Chappell Steel Co. in Detroit.

Hardly a day goes by that somebody—a customer of mine, a friend, whoever—doesn’t ask, “Well, is Harbaugh going to do it? Is he going to get that place turned around?” The answer is yes, not because he coached in the NFL or because he coached at Stanford. It’s because of what he learned at Michigan. One thing I know for a fact is you’re going to see effort, tenacity. You’re not going to see guys mail in a block. Just like we learned from Bo, you’re not going to see guys start game in and game out if they aren’t performing. That has happened a little bit too much for our liking. I’m sure that Jim learned it from his dad, and all of the coaches that he was around, and his older brother, John—everything that he absorbed when he was a kid.

I was there with Jim three years, and under Bo for four. I went on to coach high school football. Everything that I know about football, I learned from those guys, the same teachers that Jim had. Now, he is 1,000 times more advanced than I am, but I don’t care what level you’re at—you’ve got to be tough. You’ve got to bust your butt. You can’t mail in a block. You can’t sulk. Those are the things that Jim learned. That’s why

Michigan football is going to be good, because they’re going to do it the right way. There is no alternative.

We had seven-on-sevens in the summer of ‘86, and we had off-season workouts. There wasn’t a lot of talking. It was just go do it. You were expected to do it. Go do it. Guys like Harbaugh and Jim Scarcelli, they held people accountable. You didn’t even need the coaches around. Those guys would make sure that you were living up to the standard, and if you weren’t, they were going to call you out. That was the thing that made all of these guys who played at Michigan successful in winning titles like they did.

My junior year, we played in Hawaii after the Ohio State game. Scarcelli and Harbaugh and I were at a place, and he asked these girls at the bar, “You know who that guy looks like? Who does that look like?” He says I look like Huey Lewis, so he liked to introduce me as Huey Lewis’ cousin.

Jim’s senior year—it would have been the ’86 season— right around the time when we started camp. At that time, we voted on captains. We’re at dinner in South Quad. We’re at dinner with all of the guys—you just gravitate to the guys that you hang out with, whether it’s your roommate or guys who play the same position as you. I always ate with the same guys, the Stites brothers, Don Lessner, Scott Harrala, Kyle Anderson, this group of walk-ons. We’re sitting at our same dinner table that we sat at all of the time. Lo and behold, Harbaugh pulls up a chair to eat with us. Well, we both were captains a few days after that. We all thought that was peculiar, that he would choose that day to sit down with a bunch of walk-ons. The Stites boys called him out and he swore he was just looking for a place to sit.

When Harbaugh was coaching at San Diego, there was a guy I worked with whose grandson was a good football player. I emailed Jim and said, “Hey, I got a guy here that might be the guy you’re looking for.” Jim emailed back, “I need tough guys. I need good students, tough guys.” The kid ended up playing lacrosse for Penn State.

I teach my kids things Bo taught me and things I learned playing football as part of a team—the whole team concept. I preach to my kids that you have to remember that the world doesn’t revolve around you. At some point, you’re going to be part of a company or a team, and you’re going to be responsible for a certain aspect that the whole team’s success is based on you doing your job. It doesn’t matter what job you have. It doesn’t matter what company you work for. It doesn’t matter what you do. You have a responsibility for the betterment of the team, and if you don’t do your job, the team is not going to succeed. I’m glad that I got that experience around those people, in that stadium, on that campus. Michigan runs through my blood, and I try to pass it onto my kids.

I still hang out with those guys, those walk-ons that I told you about, that sat at the table where Harbaugh came. Those guys, we all still hang out. If I’m up in Ann Arbor, I’ll call and we’ll go to lunch. One of the guys lives in Cincinatti, and when I’m down there on business, I stay at his place. The other guy is here locally and we go and hunt together. On November 15, all of us get together over by Grand Rapids and have hunt camp. I bring my son and he gets to enjoy these guys that I played football with 30 years ago. I wouldn’t trade a second of what we had to do to make it. These guys mean that much to me. The experience that we went through together means that much. I love them.

The greatest play I ever saw Harbaugh make was that 77-yard TD pass to John Kolesar in ‘85 against Ohio State. He stood there in the pocket and took a shot right in the head as he released the ball. Kolesar was running toward the north end zone and caught that ball. That’s the loudest I have ever heard Michigan Stadium. That was beautiful, man. That play was just phenomenal. What a great pass, under pressure, in a big game like that. Man.

My old teammate, Mike Reinhold, was moved from linebacker to nose guard. He said, “You know the difference between linebacker and nose guard? Nose guard is you’re at a party every day that you ain’t invited to.” I never forgot that line. I used to tell that to every kid I had who played nose guard: “You’re going to a party and you ain’t invited.” He was a good guy. Reiny was a good guy.